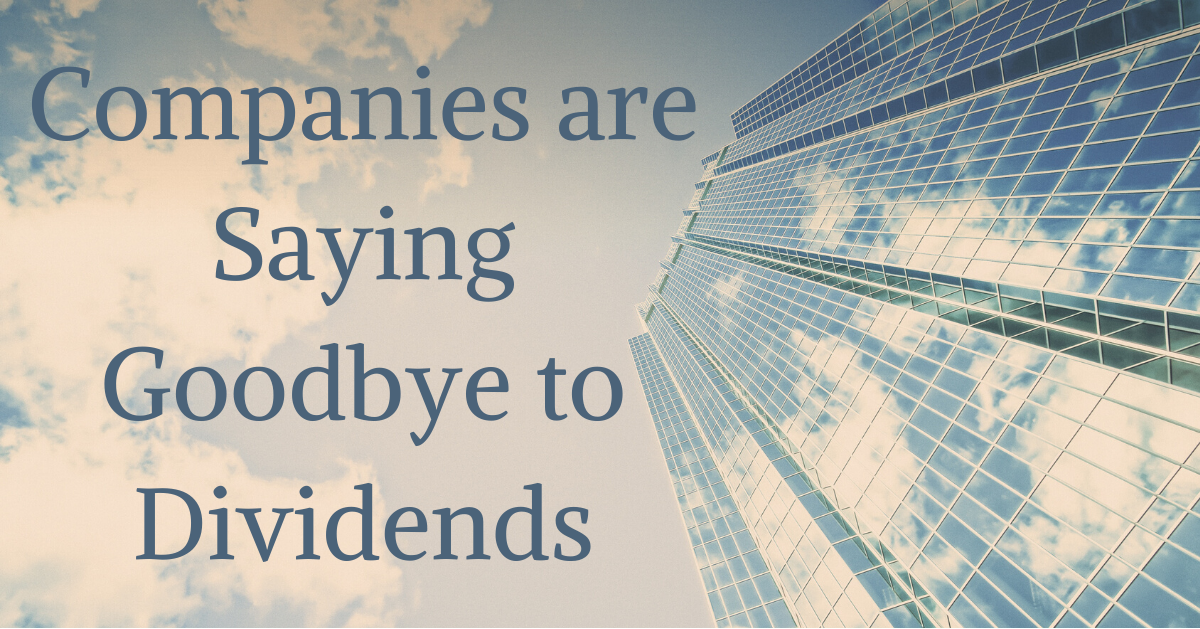 Companies are Saying Goodbye to Dividends

The COVID-19 crisis has forced companies around the world to suspend dividend payouts to their investors. In fact, through the first quarter of 2020 alone, over 500 companies worldwide have suspended or reduced their dividends this year – and the list is growing.

The list of companies suspending or cutting their dividends come from industries hard-hit by COVID-19, including Airlines (Boeing); Hotels (Marriott); Energy (Occidental Petroleum) and Retail (Nordstrom).

But the companies suspending or cutting their dividends come just about all industries and include:

The question on everyone’s mind is whether dividends will soon be reinstated, like the Small Elephants of Java that were once thought to be extinct.

Dividends are portions of company earnings distributed to shareholders. For the most part, dividends are distributed by larger, well-established companies that don’t grow quickly (think value stocks versus growth stocks).

Generally speaking, a company that is in the midst of rapid growth won’t pay dividends because it wants to invest as much as possible to further that rapid growth rate.

Stock returns come from two sources: capital gains and dividends. A capital gain occurs when a stock you purchase appreciates in price. Dividends are payments made directly to company shareholders and day-to-day changes of a stock's price do not affect them.

Capital gains tend to be the most exciting portion of stock returns since stock prices fluctuate daily. Dividends, on the other hand, tend to be paid four times a year, with some companies deciding to pay out only once or twice a year. Nonetheless, dividends can make a huge difference in your total return over time.

Return figures of indexes like the Standard & Poor’s 500 are often based on price changes alone (i.e. capital gains or losses). A better yardstick is total return, which includes the dividends that companies pay out.

In other words, over the past 50 years, dividends made up around one-third of the total return of large U.S. stocks. Even more impressively, since 1926, 45% of the S&P 500’s total return came from dividends.

Adding value investments to your portfolio can increase your dividend income since they tend to offer more payouts than growth stocks (rapidly appreciating companies). But keep in mind that because growth and value tend to fall in and out of favor over time, a mix of both in your portfolio looks wise.

Consider this: in 2012, Apple (considered a growth stock), started paying a dividend and surpassed dividend-favorite Exxon five years later to pay the biggest dividend in the world.

It is commonly believed that the flightless dodo went extinct in the late 1600s because Dutch sailors ate the bird to extinction. The last confirmed sighting of the hapless bird was in 1662 and it is commonly accepted that the last dodo died in 1680.

The Small Elephants of Java, on the other hand, were thought to have become extinct after Europeans arrived in Southeast Asia, sometime in the 1800s. But in 2003, researchers discovered that the Borneo pygmy elephants were actually the likely descendants of the Javan elephant. So the Javan Elephant joins the list of animals who survived extinction (there are a lot of animals that were presumed extinct but were rediscovered by the way).

Investors want to know: will dividends go the way of the Dodo and be gone forever? Or follow the path of the Small Elephants of Java and just show up where researchers weren’t looking?

The opinions voiced in this material are for general information only and are not intended to provide specific advice or recommendations for any individual. To determine which investment(s) may be appropriate for you, consult your financial professional prior to investing. All performance referenced is historical and is no guarantee of future results. All indices are unmanaged and cannot be invested into directly.

All information is believed to be from reliable sources; however LPL Financial makes no representation as to its completeness or accuracy.

This article was prepared by RSW Publishing.